28 Jan A day with Friends in Need Food Bank

To mark International Volunteer Day in December 2020, FoodMesh pledged 150 volunteer hours to food security organizations in our communities. This series goes behind the scenes of the teams’ experience at those organizations.

The Friends in Need Food Bank in Maple Ridge, BC, is one of the first organizations to partner with FoodMesh through the Retail Food Recovery Program. They currently serve an average of 1025 people a week with fresh and non-perishable food items through their food hamper program, using donations they receive from local retailers.

They have been picking up fresh food donations from four local Save-On-Foods stores on the program since late 2018. To date, they pick up donations 7 days a week from a total of six major grocery stores. With the dedicated work of store staff and the volunteers at the food bank, Friends in Need has recently surpassed an incredible milestone of recovering the equivalent of 1 million meals to feed people in their community. I was eager to see this organization, an organization that has been leading the charge in the space of food recovery in Metro Vancouver, in action.

For my volunteer day, I arrived at its Perishable Food Recovery Facility at 7:45 am with a warm welcome from Karen Osborne, Manager of the Perishable Recovery and School Programs. As soon as I arrived, I washed my hands and got to work. A van had already arrived and volunteers were unloading the donations of their first Save-On-Foods pickup.

I worked alongside three other volunteers from a local recovery house to sort the totes by department, then by human-edible vs. inedible, and finally weigh the food to enter into the Diversion Tracker App. All donations arrive in plastic totes that are provided to the stores by the food bank, which makes for easy sorting and efficient storing.

Knowing that incredible organizations like Friends in Need exist, who see surplus food, not as waste, but as a valuable resource that has the potential to feed hundreds of people in our communities, fills me with optimism

As soon as we finished sorting and weighing the donations from the first store, another load was dropped off. This continued until we completed sorting through all six stores’ donations. There were probably about 20-30 totes filled with surplus food from each Save-On-Food store. This is hundreds of kilograms of food each day that is deemed unsaleable and destined to be thrown out. I was primarily in charge of sorting through the meat, as well as helping to sort and weigh the other items like produce and deli products. Whether edible or not, all the meat would be placed in the walk-in freezer to be stored until it gets distributed. The inedible items are set aside for local farmers to use as farm feed or compost. One farmer even takes the inedible meat to make dog food!

Karen explained that it’s been a challenge to find consistent and reliable volunteers. She’s grateful to the recovery house who generously provides volunteer support on a daily basis but previously when the recovery house had to close its doors temporarily due to COVID, the food bank was left without any help. The volunteers rotate between various tasks such as picking up donations, sanitizing totes, sorting and weighing, and distributing food to clients. Although they joked around that they are not “volunteering” but rather are “voluntold” to help, they were all in good spirits and said they feel rewarded when handing food hampers out to the clients. 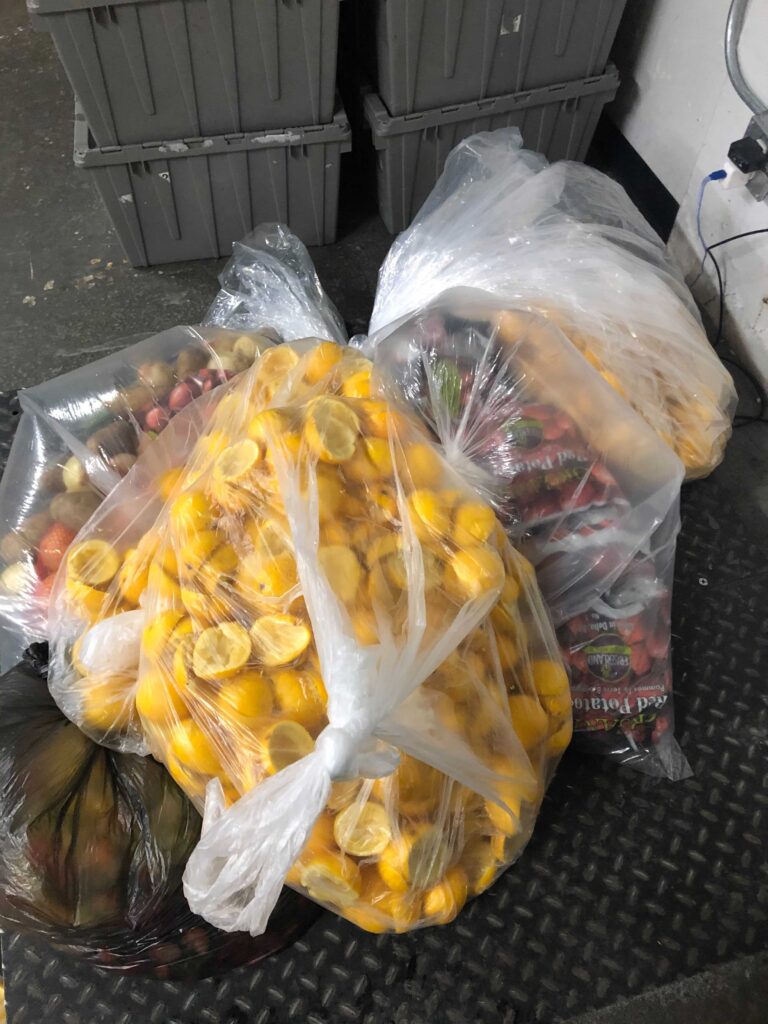 As the morning came to an end, I felt a mixture of relief and a sense of hope. It was inspiring to see the staff and volunteers who work so hard day in and day out to feed those in the community who need it most. The rescued food I saw that day was only the tip of the iceberg – it made me wonder just how much edible food is wasted each day. Knowing that incredible organizations like Friends in Need exist, who see surplus food, not as waste, but as a valuable resource that has the potential to feed hundreds of people in our communities, fills me with optimism. It reminds me of the important fact that there is no such thing as waste, only wasted resources.

Friends In Need Food Bank, From the team, Save-On-Foods